This publication is part of a developer guide focusing on the new features in 2nd generation Intel® Xeon Phi™ processors code-named Knights Landing (KNL). In this document we discuss the on-package high-bandwidth memory (HBM) based on the multi-channel dynamic random access memory (MCDRAM) technology:

Memory bandwidth in computing systems is one of the common bottlenecks for performance in computational application. Bandwidth-limited applications are characterized by algorithms that have few floating point operations per memory access (low arithmetic intensity). Algorithms in this category include BLAS Level 1 and Level 2 routines (such as vector dot-product and matrix-vector multiplications), fast Fourier transforms and stencil operations. With low arithmetic intensity in an application, the floating-point capabilities of a processor are generally unimportant, but memory bandwidth determines the application’s performance limit (see, e.g., this paper).

To address this demand for memory bandwidth from such applications, the 2nd generation Intel® Xeon Phi™ processors based on the Knights Landing architecture (KNL) have on-package high-bandwidth memory (HBM) based on the multi-channel dynamic random access memory (MCDRAM). This memory is capable of delivering up to ≈5x performance (≥400 GB/s) compared to DDR4 memory on the same platform (≥90 GB/s). Taking maximum advantage of HBM is be key to achieving great performance for bandwidth-sensitive applications.

HBM on a Knights Landing processor can be used either as a last-level cache, or as addressable memory. This configuration is determined at boot time, by choosing in BIOS settings between three MCDRAM modes: Flat mode, Cache mode or Hybrid mode. Figure 2 shows a schematic of the three modes. 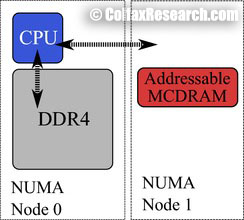 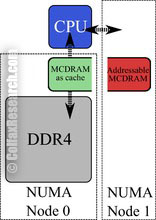 Advantages and disadvantages of the three modes are:

The best mode to use will depend on the application. Guidelines for choosing between the modes for a particular application are discussed in more detail in Section 4. In the remainder of this section, we will delve into the technical details of the three MCDRAM modes.

The advantage of using the HBM as cache is that it is managed by the platform and is transparent to software. So no action is required for the developer to use the HBM in an application, which makes HBM as cache effective for developers unfamiliar with memory performance tuning, or for applications that are difficult to tune.

The drawback of HBM as cache is that it potentially increases the latency of access to the on-platform memory (DDR4). Figure 3 illustrates the case where a core requests data from a memory address not cached in the L1 or L2 cache, and the HBM cache does not have the requested address, either. 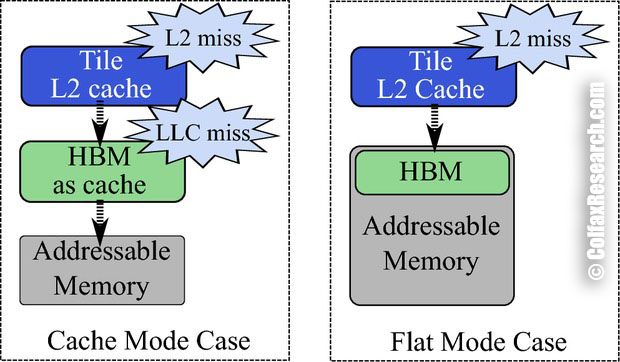 In the Cache mode, the core will have to query the HBM as cache, and only after that will it forward the request to the on-platform memory controllers. In contrast, if HBM is used in the Flat mode, as a part of the addressable memory, the core with an L2 cache miss will go directly to the on-platform memory. HBM as cache adds an extra step, and hence latency, when both L2 and HBM cache have a miss.

When the Knights Landing processor is booted in Flat mode, the entirety of the HBM is used as addressable memory. HBM as addressable memory shares the physical address space with DDR4, and is also cached by L2 cache. With respect to Non Uniform Memory Access (NUMA) architecture, the HBM portion of the addressable memory is exposed as a separate NUMA node without cores, with another NUMA node containing all the cores and DDR4.

A valuable command-line tool when using the HBM as flat mode is the numactl tool (part of the Linux distribution). To find out which NUMA node is associated with HBM, run the command numactl with the –hardware or -H option and look for the node with no cores.

Listing 1: Using numactl -H to find the size and NUMA node of HBM.

For the system in Listing 1 (a pre-production 2nd generation Intel Xeon Phi coprocessor with 16 GiB of MCDRAM), NUMA node 0 is the on-platform DDR4 memory with all the cores, and NUMA node 1 is the on-package MCDRAM with no cores associated with it (i.e., the HBM).

The advantage of HBM as addressable memory is that the developer has more detailed control over HBM when compared to the HBM as cache. With appropriate tuning, an application with memory usage over 16 GiB may perform better with HBM as addressable memory than with HBM as cache. The reason for this is that in Flat mode, unlike Cache mode, accesses to objects in on-platform memory do not have to query the on-package HBM first.

However, using HBM as addressable memory often requires more application development compared to HBM as cache, because the usage of HBM is completely left to the developer. Application memory is allocated to DDR4 by default, so the developer needs to specify allocation in HBM with either command-line tools or special allocators (discussed in Section 3). Performance tuning is often more difficult for HBM as addressable memory, especially for larger or more complex applications.

Note: For the remainder of Section 3, HBM will refer to HBM as addressable memory.

Because numactl is a command that is used at run-time, this method requires neither any code modification, nor recompilation.

As we have determined (see Listing 1) that NUMA node 1 is the HBM, we can to bind memory allocation in executable run-app to HBM like this:

It is important to note that the NUMA node associated with the HBM is different depending on a separate boot-time configuration option for clustering mode (see this paper for more information on clustering modes). Thus, it is good practice to always check the NUMA configuration of the Knights Landing processor with numactl -H before using numactl -m to bind the application to the NUMA node with HBM.

To use HBM NUMA nodes in the SNC-4/SNC-2 modes (the above cluster modes), use a comma separated list for numactl –membind

Note that this methodology works for any executable with memory footprint smaller than 16 GiB, regardless of the programming language used (provided that the code does not change the NUMA policy and does not specifically allocate to the on-platform memory).

Memkind library is a user-extensible heap manager built on top of jemalloc, a C library for general-purpose memory allocation functions. The library is generalizable to any NUMA architecture, but for Knights Landing processors it is used primarily for manual allocation to HBM using special allocators for C/C++. The library also has limited support for Fortran, which is discussed in Section 3.3.

Listing 3: Linking for memkind and hbwmalloc.

hbw_malloc() works just like the standard malloc(): it allocates a block in the HBM and returns the pointer to the start of the block. Two variants of heap allocators in jemalloc library, calloc() and realloc(), have HBM counterparts, hbw_calloc() and hbw_realloc().

It is important to note that the memory allocation functions will only attempt to allocate in the HBM. If there is insufficient space in available HBM, it will fall back to DDR4 memory without warning. This behavior can be modified with hbw_set_policy(). For the description of the available policies, visit the Linux manual page for hbwmalloc with:

It is also possible to determine whether HBM is available by using the hbw_check_available() function. Note that this does not return how much is left: only whether or not there is any available.

hbwmalloc also has more advanced allocators that provide the control required for certain optimization. For example, sometimes you may want to specify memory alignment for your allocations (see this paper). To allocate an aligned memory block with hbwmalloc, use hbw_posix_memalign(). Listing 5 demonstrates aligned allocation in HBM.

It is also possible to specify the memory page size using hbw_posix_memalign_psize(). For more information on the available page size options, check the Linux manual page for hbwmalloc (see Listing 4).

Memkind library does have support for Fortran, but it is limited in scope. With Fortran, only allocatable arrays may be explicitly placed in HBM. Attribute FASTMEM directs the runtime system to place an allocatable array to in the HBM.

At the same time, as mentioned above, Fortran applications may be run completely from HBM using the numactl tool, as long as these applications fit completely within the installed HBM (up to 16 GiB).

So far in the publication, we have discussed three MCDRAM modes for different HBM usage (see Section 2}) as well as two methods for employing the HBM as addressable memory (see Section 3). This leaves open the question of choosing the optimal method of HBM utilization. As a starting point for this decision, we recommend using the flow chart shown in Figure 4 to decide on the usage model of HBM.

At this point, recall that HBM is useful only for applications sensitive to memory bandwidth. If your application has high arithmetic intensity (i.e., high data re-use in caches) or very little memory traffic (i.e., fits in the L2 cache), you may as well forget about the on-package memory and keep using the regular on-platform memory on Knights Landing like you would on a general-purpose CPU.

Examples of applications that are not sensitive to memory bandwidth are BLAS Level 3 routines (such as general matrix-matrix multiplication optimized for cache utilization) and some Monte Carlo calculations with small memory footprint. In compute-intensive applications, arithmetic performance is more important than memory bandwidth, and development effort should be focused on arithmetic capabilities of KNL (see this paper).

The memory being used is the value under RSS (in KB). Note that ps reports the usage at the time it is called: if the application has a lot of allocations and deallocations, you may want to combine ps with watch and monitor the usage.

Here are some characteristics to look for when finding bandwidth-critical data.